NarraFirma has been getting some attention lately. I received development commissions from several NarraFirma users, so I've been working on the software since early November, and I've bundled together all the things people wanted into a new version, 1.2.0.

The blog post on the NarraFirma web site goes into great detail about all the new features and changes. I'll just give you a quick overview here.

You should now find it easier to work with NarraFirma alongside such survey systems as SurveyMonkey, LimeSurvey, Google Forms, and the Open Data Kit.

To begin with, you can import a wider variety of question formats, and there are many new import options. You can also specify all of your import options in NarraFirma itself, without writing a CSV specification file.

And there is a new pre-import check, so you can see exactly what is being read correctly and incorrectly.

I also wrote a new 18-page Guide to importing data, which explains everything I know about it.

One of NarraFirma's strengths is its automatic combination of questions. Every possible combination of this-versus-that is generated for you. So when a NarraFirma user suggested a combination I had never thought of before, I just had to build it. It's a choice by choice by scale graph, a contingency-histogram chart, which looks like this: 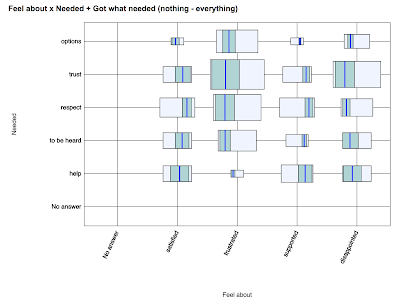 The little pseudo-histograms in the boxes help you compare the distribution of a scale question (like: Did the people in this story get what they needed?) among subsets formed by the conjunction of two choice questions (like: the people in the story needed respect, and the storyteller felt disappointed about the story).

There's also a new "Story length" question, so you can see if people more disposed to verbosity had anything different to say. 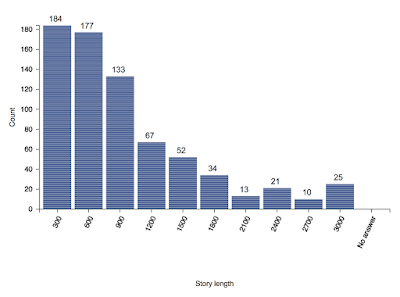 Also, you can now write out the graphs in your catalysis reports using SVG format. SVG graphs come out sharper than the old PNG option (which is still available) because they are vector-based. You can also style SVG graphs using CSS classes (even after you have saved the HTML report -- that is, outside NarraFirma).

Also, you can now print an observations-only catalysis report. I added this specifically to support people who want to do their catalysis in a group workshop.

NarraFirma uses what is called a journaling datastore. We chose this option because we wanted to make sure your data would be stable and difficult to corrupt or destroy. However, a journaling datastore is a little cluttery, in the sense that it's not that easy to delete things when you want to. However, with a bit of arm-twisting, I got my husband (who wrote the lower-level part of NarraFirma) to help me write some code that will help you clean house. You can read about the new housecleaning options in the blog post.

In general, while I worked on this update to NarraFirma, I remembered all the things people said to me about it over the past year or so. I remembered their confusions and gripes, and I tried to address them all. So you will find many little improvements to explanations and placements of things.

Here's one example: "quick links" on the Home page to the major things you created in your project (questions, forms, reports). 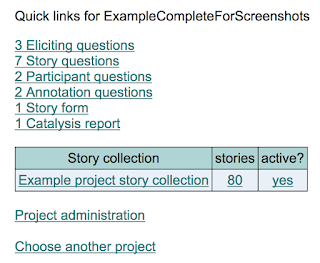 I've also reduced the irritation factor in several places. To give just a few examples:
And so on. There's lots more stuff like that.

Finally, I would like to thank everybody who paid me to improve NarraFirma. We have all benefited from your generosity. Here's to the future development and growth of NarraFirma!