What I learned at the NCDD 2014 Conference

So I'm back from my first real conference in ten years, and I learned a lot. This is the conference I mentioned a few blog posts back, of the National (US) Coalition for Dialogue and Deliberation.

The first thing I learned was: I'm ten years older than I was ten years ago. Conferences have always been exhausting, but this one felt like a strange dream in which crowds of faces surged and receded while I surfed on crests of ... of ... lots of stuff. However, I survived; I have vague memories of the event; and I have some things to tell you.

One thing that surprised me at the conference was how many people there do story work. Only a few people said they do story work, but a lot of people worked with stories in some way, while they were trying to get people to understand each other.

My initial reaction on pointing this out to myself was, "Sure, but they don't really do story work. It's not as intense or authoritative or authentic or deep or...." And in the midst of trying to justify myself to myself, I realized that I may be on my way to becoming pompous.

Do you remember the thing I'm always saying about how the best storytellers are the people who don't realize they are telling stories? About how, once people begin to be proud of the quality of their storytelling, the quality of their storytelling declines? I'm starting to wonder if there is a parallel process in doing story work. Maybe the best story workers are people who work with stories without knowing it. Maybe, over the years, I have become not only a story performer but a story-work performer as well. I'd like to think I have passed through the story-work-performer state into a state of deep wisdom, where I have become both natural and skilled; but, alas, I find that my skills of denial cannot rise to the challenge of this assertion.

Solutions to pomposity and story-work performing I can come up with include the following.
Number three is my new plan. One part of the plan is the "translation dictionary" idea, which I think I mentioned here before. This idea is to develop a set of (relatively brief, don't worry) writings about how PNI connects to as many fields and approaches and methods as I can possibly find. Before I went to the NCDD conference, I thought I should build a translation dictionary because it would be helpful to you. Now I think I need it even more than you do.

My least-favorite assumption is still alive and well

I am sorry to tell you that the "story work means telling stories" assumption is still going strong. People are still very little aware of natural, everyday story sharing and the functions it provides in society and in communities and organizations. When people talked to me about ideas for using stories in their work, their first impulse was always to talk about how they might use stories to communicate with the public -- i.e., to tell stories.

I don't ever want to minimize the function of storytelling as purposeful communication. It is reasonable and laudable to convey essential messages through stories. However, if this is the only thing people think they can do with stories, or get from stories, that's a sad thing. Because using stories to communicate is just the tip of the iceberg of what stories can do for a community or organization (or society). Those of us who care about stories have more work to do to get that word out.

It's getting crowded in here

In More Work with Stories, I connect PNI with nine other fields. But I have been realizing lately that I could probably connect it with ninety, if I broadened the scope to methods and approaches as well. Getting involved with the NCDD has helped me to learn that I have been hiding in a hole in terms of the many ways people have developed to help people make sense of things together. Just because a method doesn't say anything about stories doesn't mean it doesn't have anything to do with stories. If it has to do with people and communication, it has something to do with stories.

For example, as part of my NCDD learning, I recently bought The Change Handbook, which describes 61 methods for helping people create positive change. Can you guess how many of those 61 methods I was familiar with before I found the book? Eleven. Why have I not been building more connections? (Because I've been writing a book, that's why; but still.) Now I want to know: How does PNI connect with the World Café? The Art of Hosting? Dynamic Facilitation? Wisdom Circles? Bohm Dialogue? Open Space? Systems Dynamics? Charrettes? Non-Violent Communication? Future Search? And so on.

This universe of connections is yet another reason to build a translation dictionary. I had been thinking about the dictionary as a way for people to understand PNI, and above I described it as a way I could share story work more completely. But a translation dictionary could also help people move back and forth between PNI and a variety of other methods as they build the suites and composites that best fit their contexts and purposes.

I started thinking through what a template for a translation dictionary might look like. I came up with this process:
I visualize the whole pattern as something like this: 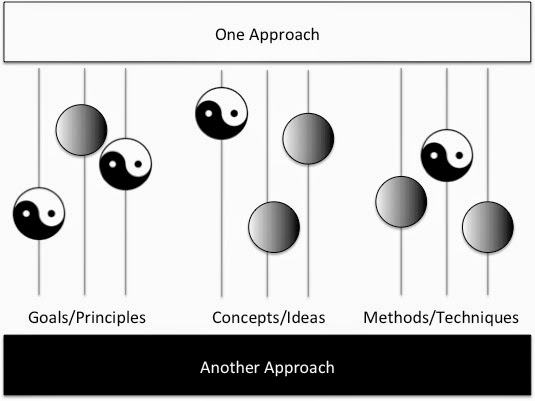 ...where the grey circles indicate similarities, and the yin/yang symbols represent contrasts. Here I have vertical circle placements showing the relative centrality of each element to each approach, but that might be too fussy. I like diagrams, but I know some people would not get much out of the extra visual information.

So as I thought about this template, I realized that I had seen something similar before. What I was creating looked a little like a template for a pattern language. You could even say that my categories of goals, concepts, and methods are like the pattern language elements of context, problem, and solution.

These are just wild speculations, and some might not agree with them. My plan right now is to make a start on my own connection language, using a template like the one above (which will evolve), and fold it into the second book. If you are interested in the idea of connection languages and want to work with me, or do something similar, let me know.

I went to the NCDD conference pretty much by accident. A champion of my book told me that he was going to the conference and planned to tell people there about my book. I said, hmm, what's this, and if people there might like my book, should I think about going too? I had been thinking that I could start going to conferences again, now that my son is old enough that I can (stand to) leave home for a few days. So I joined the NCDD and signed up. (Sadly, my champion was not able to go due to a family emergency.)

Ending up in what seemed to be the wrong place at the wrong time was a revelation. Even though I might never have chosen this conference without someone else planning to go there first, it was just the right conference for me to go to. I have long complained about how there are no good story-listening conferences to go to, how people who do the work I do have to show up as beggars at knowledge management and decision support and management conferences. But I've now come to realize that this poverty is a strength in disguise. I would have learned so much less at a conference where everyone already knew what I had to say, and where I already knew what everyone else had to say. It is so very mind-expanding to go to a conference you feel like you have no reason to go to! In fact, I am now resolved to seek out conferences that have as little as possible in common with what I have done before. If I will not be hopelessly lost and over my head, I should not go. If you know of a conference I should not go to, please let me know about it!

What excited me most about this conference was that I was able to connect with people who shared my passion for helping people get along and create better futures together. I sometimes feel alone in what I do, like nobody cares if we stop telling each other stories, like people are content to see stories used only to manipulate and influence. Our nascent PNI Institute is building a new community in the story space, so that's changing already. But the people I met at the NCDD conference really cared about participatory democracy; about inclusion; about bringing power to the people; about bridging divides; about finding better ways forward. They didn't consciously work with stories for the most part, but they cared about the things I cared about. Is this my tribe? I'm not a one-tribe person; I like to flit among several tribes. But this might be one of them.

The rest of the story

I have placed my full conference notes here for those who would like to read about what went on (that I saw) at the conference.

My favorite quotes from my conference notes:
Hooray for creativity! And for collaboration. 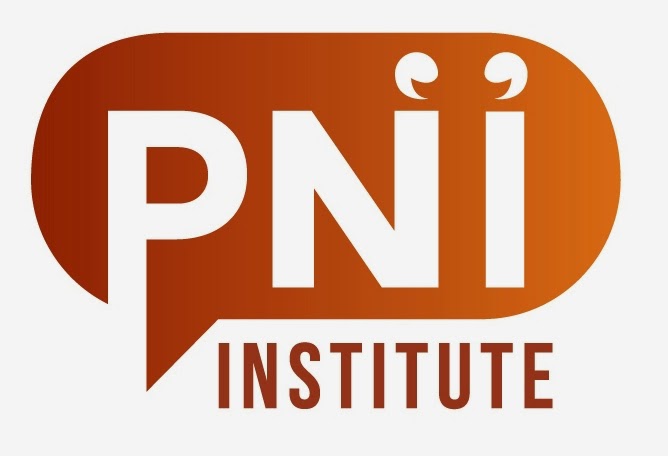 Well, folks, I've gone and got myself mixed up in another crazy scheme to save the world.

The PNI Institute is a new membership organization for people who are enthusiastic about growing and improving participatory narrative inquiry. It has been created as a collaborative effort by Aiden Choles, Ron Donaldson, Harold van Garderen, and myself.

Our group is in its early days, but we agree on a few important things:
You can read more about these founding ideals on our about page.

Right now the pni2.org site hosts a group blog, to which I will be posting monthly (don't worry, I will keep this blog up as well). I've already written my first post, in which I recount my history with PNI and list my hopes for the institute. (The other first posts are also worth reading. The diversity of the group is already exciting!)

We plan to expand our membership, though exactly how we go about doing that is still in discussion. An online forum, a collaborative wiki, an online peer-reviewed journal, and some sort of unconference are all being discussed as well. Expect to see more details on the pni2.org web site as time goes by.

If you have any ideas about what sort of organization you would like to see grow around PNI, or if you want to get involved in the PNI Institute, please let me know, either in the comments or in email. I'm all ears.

One more thing: I will be in Washington, D.C. from the evening of October 15 to the morning of October 20, to attend the NCDD conference. If you live nearby and would like to meet me in person, send me an email and we'll see if we can connect.
No comments: