What I have been up to

Hello people. It has been increasingly bothering me that my last blog post was over a year ago. I wonder if people might think I have vanished off the face of the earth! Not yet.

I have been working on a book. I have been working on it harder and more exclusively than I usually work on books, to the point of refusing paid work, shunning correspondence, and not keeping up with other projects (including this blog). But now I'm close to being done with the book, close enough to tell you about it.

It is not the book you think it is. For the past several years I have been working on a book (At Home with Stories) about the interplay between commercial and conversational storytelling. Two years ago, I was putting a lot of time into that book project, and I felt like I was maybe six months away from finishing it. Then I suddenly got a rush of consulting work that lasted for several months. I was glad to make some money! Then I was eager to get back to the book.

But then, just as I was getting started on the book again, my mother suddenly passed away. She was 87 years old, but we thought she had another year or two left, and besides, my mother was not the kind of person who did things without a plan. Anyway, last summer I ended up spending a lot of time at the house I grew up in, helping to clean it out and sell it.

There is nothing like being suddenly orphaned to draw your attention to what you are going to do with the rest of your time on the planet. That's probably why I found myself thinking a lot about the Confluence framework. It had been years since I had put any time or thought into it, but somehow, at my childhood home, it reached out to me and asked me to work on it some more.

The Confluence framework is a series of two-dimensional spaces that people can use to think about organization and self-organization in situations they care about. From 2001 to 2010, its basic form (its first space) was part of the Cynefin sensemaking framework. In 2010, I started calling it the Confluence sensemaking framework. Since then it has existed only as a page on this blog. I wanted to develop it into something better, but other projects kept getting in the way (see above). Then, last summer, as I said, I decided to spend a little time on it before I plunged back into working on the At Home with Stories book.

My first thought was that I should write an academic paper. As an independent researcher, I try to publish peer-reviewed papers every so often. But I can't say that I enjoy the process. Finding the right publisher, figuring out what they want, writing the paper, dealing with the editing process, and then realizing that hardly anybody will ever read what I have written . . . is a little disheartening. Writing for everyone on earth, like I did with my first book, gives me a lot more creative energy. So I decided not to write an academic paper.

Then I thought: maybe I should make the framework into a game. I mean, it is a game, in the sense that it is a group exercise people do with materials and instructions. So I thought: why not make it into a nice cheap or free card game that lots of people could download and use? So I started working on card designs and board patterns.

One part of the game, an essential part, I thought, was a series of example cards: situations people could think and talk about as they placed them on the spaces. I started working on a series of example cards. The explanatory texts on the example cards kept getting longer. And the game's instruction sheet kept getting longer. Then one day I realized that the Confluence framework didn't want to be a game with a book in it. It wanted to be a book with a game in it.

Another book? I was still in the middle of writing At Home with Stories, and I had started writing that book in the middle of writing More Work with Stories. Did I really want to live inside three nested book projects? But I thought: well, maybe I can write this new book quickly, and then I can get back to the other one (and then the other one after that). So I tried writing just the first chapter of the book, as a test. It took two weeks, and it was a lot of fun. So I thought, well, maybe I can finish the whole book in six months.

It has been over a year since that day, but I am close to finishing the book. These are the chapters as they stand right now.

Eight of the ten chapters are finished, reviewed, and revised. The ninth chapter (The Mix) is about halfway done. After that only one chapter remains (The Void). As of this writing I am fairly confident that, barring any emergencies, the book will be ready to publish in . . . January? February?

This is the book cover as it stands right now. 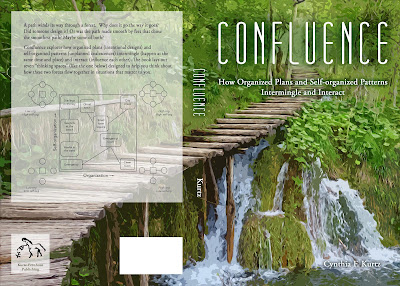 Writing this new book has been an act of faith and patience, but it has also been a joy and a revelation. It has helped me to develop the Confluence framework into a state that I believe will be much more useful to the world. I have reworked all of the framework's spaces, added two more spaces, and improved all of the diagrams. In fact, I now wince every time I have to look at what I wrote about the framework before. That's an excellent sign of progress.

For each of the seven book chapters that describes a space, I have allowed the space itself to suggest several situations and stories that I think will help readers understand and make use of the space. In all there will be about fifty of these examples.

The process of discovering and exploring these examples has led me on many journeys through subjects I knew little about to start with. Some of the journeys have been simple and straightforward; others have been long, frustrating, and full of surprises. All of them have been revelatory, in the sense that I understand the ways in which organization and self-organization come together much better than I did before I started the book project. Hopefully some of that improved understanding will make its way to the people who read the book.

Even though the worked examples fill up most of the book, they are not its main purpose. They are there to support the book's main purpose, which is to help groups of people think about and talk about situations they care about. For that reason, the book contains game-like instructions and materials that I expect people to photocopy and use in group exercises. My hope is that people in families and work teams and citizen groups and all kinds of decision-making bodies will use the book to enhance their situational understanding and decision making.

The book has an upbeat, every-person style like you'd find in a science magazine. I am aiming it at a general readership with a late high school or early college reading ability. And I am forcing myself to keep it short: no longer than 200 pages in total. (That goal alone accounts for a lot of the time I've spent on the book. If I could write as long a book as I wanted, it would probably be done already.)

I have been having three people read and comment on each chapter as I have written it. In addition, I have a list of sixteen people (of all ages and backgrounds, some of whom know nothing about complexity) who have agreed to read the entire book when it's ready and send me feedback before I publish it. If you are not on that list and would like to be, I would be happy to add you. Just send me an email. The only caveat is that I am asking people to send me their feedback within two weeks of receiving the book draft, so I can get it ready to publish soon after it's done.

So that's what I've been up to. I hope to get back to writing the other book (At Home with Stories) sometime next year. And even though I haven't been working on that book, I've been working on it in the back of my mind. I have a better plan for it than I did before. So putting it aside for a while might end up being a good thing in the long run.

A quick note about NarraFirma. I did plan to work on it for a month this fall. I have a list of small bugs and feature requests I was hoping to address. However, I decided to put off any major releases until the book is done (I do not want to lose momentum). I do plan/hope to spend a good few months on the next version of NarraFirma in the early new year. If you have any ideas for NarraFirma, or if you find any bugs, please let me know. I will be getting to it again soon.

A quick note about COVID-19. I had it. Don't get it. It's not fun. A few tips in preparation: Learn to sleep on your stomach. Find some breathing exercises online. Practice them daily. Strengthen your lungs. Get lots of aerobic exercise. Take Vitamin D. Buy a pulse oximeter, some cough medicine, some licorice tea, and a good heating pad. Take care of yourself. Practice your gratitude.

In conclusion: I am still here. I am still working hard. I hope to have something to show you soon.