I am finally ready to announce the release of NarraFirma 1.0. I've been working on it since the summer. I was able to give the software a nice solid overhaul in functionality and usability. The blog post on the NarraFirma web site describes the changes in detail. I'll summarize just a few of the major changes here. 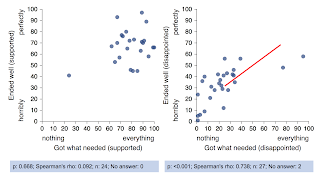 More graphs. Because we were not able to finish all the graphs we had planned for NarraFirma in the time we had to work on it before, my first priority on returning to the software was to finish its graphing aspect. Now it generates all of the graphs I have been used to relying on in my work on narrative catalysis for clients over the past 15+ years, and I don't need to supplement it (as I did before) with NarraCat or a spreadsheet. This includes all question combinations and what I call "data integrity" graphs (overall compilations of data, to look for systemic problems such as biases).

More testing. You can't see this in the software, but I used some of the time I had to import something like eight data sets from old (pre-NarraFirma) projects and compared graphs and statistical results to what I had calculated using other means. I did find one bug in the chi-squared test that was preventing some significant results from appearing, but nothing else was wrong. (I also found and fixed many little bugs that irritated me as I went about playing with data and projects.)

More options. NarraFirma is now much less "hard coded" than it was. I added many options for changing the way things look - story forms, story cards, catalysis reports, and so on - both by including custom CSS specifications and by opening previously fixed texts to user manipulation. For example, it is now possible to create a story form that has no English text in it anywhere. The application is still not multi-lingual - the NarraFirma interface remains in English only - but it is closer than it was to that goal. Importing data is also much improved, with better error reporting and more information about how to successfully import data collected elsewhere. 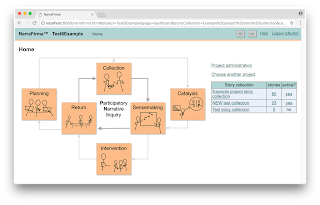 Better appearance and ease of use. I took a critical look at NarraFirma's appearance, and I changed lots of little things (colors, placements, spacings, etc) that had come to grate on me over time. I think the new look is cleaner and more professional looking. I also fixed many little irritating and/or confusing aspects of using the software, and I hope this will reduce the learning curve and make the experience of using NarraFirma more pleasant.

To finish off the new version, I am now working on replacing the old (horrible) NarraFirma video with a better introduction to what the software can do for people.

You can try out the new version of NarraFirma by going to the web site and clicking on "Try it!" in the menu at the top of the page. Or you can look at the screenshots page on GitHub (scroll down past the file list) to get a guided tour. As before, NarraFirma works either with Node.js or as a WordPress plugin.

Now I'll answer a few questions I think people might have about NarraFirma.

What's in the future for NarraFirma? My plan is to keep using it on projects for clients (now without having to rely on any other software to fill in missing graphs). And as I have done with several previous software programs I've developed, I plan to keep improving NarraFirma as I use it, so that it will work better and better for me and for everyone else as well.

What's your business model for NarraFirma? You mean, how do I plan to be able to keep working on it? I plan to make money through a combination of back-end project consulting, coaching, and  bounties (commissions to add specific functionality people want to see in the software). In addition, if I do get that online training course going next year, NarraFirma is now in a much better place to support students. If you are interested in coaching, training, or consulting with respect to participatory narrative inquiry and/or NarraFirma, let me know. If I can get enough work helping people with PNI and NarraFirma, I can keep the software alive and growing. So we'll see how that goes.

What can I do to help NarraFirma survive? Well, obviously, you can hire me to do some coaching or consulting for your projects; but there are many other ways to contribute. If you use NarraFirma, you can spread the word about it; you can help other people use it by answering questions or making videos about it; you can contribute code (talk to me about that); you can report bugs and suggest improvements. Just writing me an email to tell me that you are using the software makes a difference. It's hard to keep working on something (especially without pay) when you aren't sure if it's being used. Every bit of feedback and support helps, whether there is money attached to it or not. (And here I would like to thank the NarraFirma users who have sent feedback, bug reports, and encouragement - you have made a huge difference.)

What's that about a training course? I wrote about my ideas for an online PNI course on this blog twice in recent years (most recently here). Several people have since encouraged me to keep developing those plans, so the idea remains on my mind. Updating the software has been one part of getting ready for such a course. However, I don't feel like I can concentrate on a course offering until I've got at least two of the three nearly-finished books off my mind; so that's next on my agenda. (That is, unless I am deluged with requests for the course to start soon. If you read my plans for an online course and want it to happen sooner rather than later, do tell me, because I'm still testing the waters on what could be a lucrative, career-sustaining venture ... or another rewarding-but-financially-disastrous project.)

That's all the news from here. I hope you are well, readers. I hope all your projects are succeeding. Let's keep in touch.