It's a little thing, really. But I can't stop thinking about it. 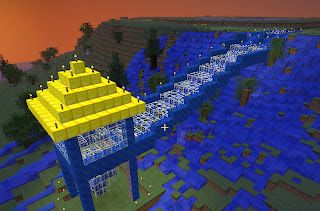 Lately my son and I have been totally caught up in a new computer experience called Minecraft. Minecraft is a curious concoction. At its core it is a virtual world where an avatar that represents you walks around in a landscape of voxel blocks: dirt, grass, trees, rivers, caves, blue skies. What happens in that landscape is up to you. Some people use Minecraft to play a game of wits and skill. If you use the game in any of the "difficulty" modes (Easy, Medium, Hard) monsters come out at night and try to kill you as you try to survive and build shelter. But you can also "play the game" in Peaceful or Creative modes, the first in which there are no monsters and the second in which you can't be hurt in any way. In these modes the program is not really a game at all but a huge sculptural canvas.

For the most part we have "played the game" only in Peaceful and Creative modes, because we do not want to fight the monsters. Why? First, anything you practice you get good at, so does it make sense to practice hurting? Second, pretending to fight in a war is disrespectful to the thousands of kids who actually are fighting in wars. (I have in mind a social project that brings some kids who love pretending to fight in wars to spend a few days with kids who are actually fighting in wars. I wonder how much they would like the pretending after that.) Third, are we to take the word of the Minecraft creators that these monsters don't deserve to live? How do we know they aren't defending their homeland from invasion? Just because they look like zombies and skeletons doesn't mean anything. Don't lots of very nice children look like that on certain October nights? Fourth, and lastly, fighting is boring and repetitive. I did have my days playing Dungeons and Dragons as a teenager, but it didn't take me long to realize that destruction is just mostly tedium. Creation is where the fun is, in the wide open spaces of the imagination, not in the dull thuds of weapon on flesh. 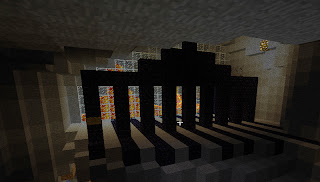 So we have used Minecraft for the most part as a canvas and testing bed for imaginary worlds. For this it is an excellent system, because the program not only comes equipped with various building materials, simple machines and pseudo-electronic circuits you can recombine in endless ways, but is also extendable by writing your own Java modifications ("mods"). We haven't built a mod yet but we plan to. The problem is that you have to turn off all the cool mods you have downloaded while you build your own, and we are having too much fun with them to do that yet. 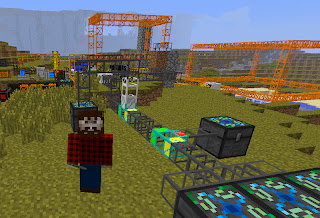 We have been using Minecraft to explore mathematics, logic, programming, engineering, architecture, art, cartography, history, archaeology, and so on. My son builds mostly elaborate contraptions: combination locks, musical instruments, alarm systems, factories, vehicles, buildings, transportation and distribution systems, mazes, automated farms. Here "he" is in front of one of his automated mining and processing facilities. We also enjoy downloading and exploring some of the many amazing creations other people have shared: castles, factories, puzzles, whole cities collaboratively built.

My explorations have been more whimsical and surreal. I've built a lot of symbolic structures: labyrinths, sculptures, temples, pavilions, meeting spaces. I have also built machines, but my machines all have Sisyphsus-like tasks, like a quarry that mines and fills the mine at once. 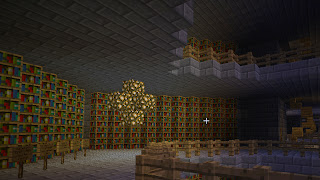 One joint project of which I am very fond is the creation of a Minecraft version of Jorge Luis Borges' "Library of Babel," which we have crafted in meticulous detail and on which we are writing out the short story on signs the visitor reads as they travel around the library puzzle (which we will eventually upload for other Minecraft users to enjoy). This is both a tribute to Borges and a creation in the spirit of his "Pierre Menard, Author of the Quixote" which is about a man who writes Don Quixote, word for word the same, centuries later. For this reason our Library must not contain one additional word that is not in the short story. Very cool.

I have been enjoying Minecraft so much that I considered writing a post about it here to recommend it, along the lines of the story games post I wrote last year about games that create useful storytelling and sensemaking materials for parents and kids. But a few days ago I thought of something that gave me another reason to write about Minecraft, as a cautionary tale about the stories sometimes invisibly embedded in the tools we use.

Deep within this otherwise excellent learning system and fun game is a frighteningly dangerous story. You probably didn't notice it when I wrote about it above. I'll repeat it: "you can also "play the game" in Peaceful or Creative modes, the first in which there are no monsters and the second in which you can't be hurt in any way."

I'll say it a third time. In peaceful mode there are no monsters. Peace is not coexistence with the monsters: it is eradication of the monsters. It is genocide.

If you are using Minecraft in a mode that allows monsters, and then you switch to Peaceful mode, the monsters disappear. It was when I was watching this happen that I suddenly saw the story hiding inside the game. We had created a "behavioral observation world" with blinds from which we observed and discussed the behavior of the various types of monsters. My son wanted to make a change to the blind, so he pulled up the options screen and changed the game mode from Easy to Peaceful. Poof, the monsters all disappeared. It was so much like the eradication of a population, along with its culture and history, that I suddenly realized this was a perfect analogue for ethnic cleansing.

Even when the peaceful mode is set on, any "spawners" that normally create monsters still create something, as my son pointed out; it's just that the things created immediately poof out of existence again. So not only does peace mean all members of an ethnic class are eradicated, any new ones that manage to be born are essentially killed at birth. 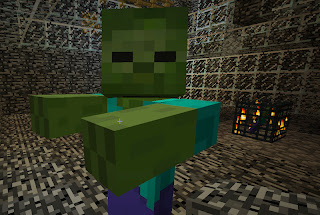 That's a zombie in our behavioral observation laboratory, with the flame-filled spawner that made him in the background. I tried to get a screenshot of the little infanticide poofs but could not catch them; they are soon forgotten.

The creators of Minecraft could have called this mode "Alone" or simply "No Monsters" mode. Why did they call it peaceful? A truly peaceful existence would not eradicate enemies; it would transform them into friends, or at least neighbors. The more I think about this the more upsetting I find it. Millions of children, mostly in wealthy countries, are learning that peace can only come about when the people who don't look like us no longer exist.

What bothers me more than finding this story underlying an apparently harmless game is how long it took me to realize this. We discovered Minecraft four or five months ago. Why did I never notice that peace meant eradication before? I probably saw those monsters poof away in front of me ten times before I realized the contradiction between peace and removal.

In their defense I'm sure the Minecraft creators didn't realize they had told this story. Maybe it was a story hidden deep inside another story, one they had been told long ago. It's a story we've all heard before. Maybe we are telling it without knowing it.

I have been thinking about creating a "truly peaceful" modification that changes the underlying story presented by the game experience. In this mode the monsters would still exist; they just wouldn't be after you. They would live out their lives next to you in peace, only responding if you attack them. (There do currently exist some "neutral" monsters that do not attack unless provoked; but in "peaceful" mode they face the firing squad along with everyone else.)

Here's an interesting wrinkle I'm thinking about adding: an "inequality" mode. In this mode the monsters exist and don't bother you; but they have nicer stuff than you have. If you can barely put food on the table, they are feasting. If you manage to build a tiny one-room hut out of dirt, they have a castle next door made of gold. The challenge, the game of wits and skill, is to live next to the entitled monsters without letting the injustice and humiliation of the situation get to you to the extent that you lash out and bring their wrath (they would have superior weapons, of course) against your impoverished people. That would be a great learning experience, and of practical use in adult life, for the majority of people on this planet. That would be a different story hidden inside, wouldn't it?

What my son and I have done about this discovery, besides talking about building new mods for Minecraft, is to discuss the implications of such an underlying assumption and how such assumptions can seep into our perceptions and decisions and actions without our knowledge. We have asked what underlying assumptions lie under other favorite stories, like Wall-E (why did the humans feel no compassion for the earth?), Cars (why did the creators of Cars perfect representations of cars as emotion-filled personifications of people, only to claim that torture scenes in Cars 2 were all right for children to watch because "they are just cars"?), Rudolph the Red-Nosed Reindeer (why didn't Santa Claus protect Rudolph from abuse until after he proved useful?) and many other of the stories we are told today.

Stories will always be as dangerous as they are powerful and empowering. The biggest challenge never lies in the creation of stories, but in the uncritical, ignorant reception of them by audiences trained to suspend disbelief.
3 comments: