What we see and what we build

So my son and I are reading this excellent book called Maps: Finding Our Place in the World, and so far I have found two elements that just beg to be connected to narrative sensemaking. They are both in the chapter by Denis Cosgrove on world maps.

First, Cosgrove talks about how we think of the words "world," "earth" and "globe" differently than people did in the past. To us, they all mean pretty much the same thing, but this is a new experience in human history.


"World" is a social concept. ... "Earth" refers today to the planet that sustains life; its reference is elemental rather than social.

This is a reference to an earlier statement about how people used to think "earth" meant only the element earth, as in earth, air, fire, water, aether. There was no "earth" concept as a planet, at least among most people. Cosgrove goes on:


"Globe" is a geometric term, another word for a sphere. ... The relationship between the globe and the modern world map is close. ... The modern, scientific conception of the world extends to the whole of the globe and encompasses the whole earth, which is why these three terms are now interchangeable. Any world is a totality and has spatial boundaries, but the coincidence of the world's boundaries with the planetary globe's is a modern conception, a consequence as much as a cause of maps.

I had not realized this before: that before (some) people knew half the planet's land masses existed, they still built globes, but those globes were not like ours. They were spheres built to represent their idea of what must have seemed a much smaller planet. To take one example, the globe created by Crates of Mallus, according to Wikipedia, ca. 150 BC, looked like this: 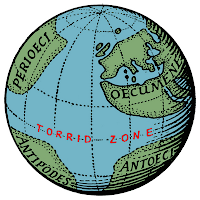 To me today, this globe looks like a sweater too small for its wearer: there is not enough fabric to cover the space.

The Hunt-Lenox globe, built around 1510, showed South America as one continent, but North America as a series of small islands, nothing more being known about it at the time. The globe belongs to the New York Public Library on whose site photographs can be seen; here is a drawing of it from the Encyclopedia Brittanica of 1874 (the image of which I found in this article). 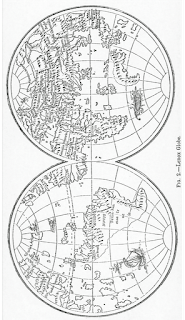 What amazes me about these early globes is that people built a coherent representation of the world as a sphere even though they were missing part of it. They sewed together the edges of what they knew to be so as to make it into the shape they knew it had to take. This is a perfect analogue to sensemaking: we take what we know and form it into something that represents what must be. We give it coherence and form through our efforts to make sense of it. Imagine what it must have been like to build and use such incomplete globes, then find out about the New World in its entirety. It would be like us finding another earth, teeming with life, hiding behind the moon. How would our sensemaking cope with that? How would we change?

That leads into Cosgrove's second amazing (to me) statement about maps and sensemaking:


The 1972 photograph taken by NASA's Apollo 17 astronauts, unique as an eye-witness photograph of humans' home planet, ... is certainly not thought of as a "map," although it shares many technical aspects with world maps, and has influenced considerably the design of subsequent world maps -- for example the disappearance of the graticule (grid) of latitude and longitude, the "photographic" appearance, and the use of "natural" color on many wall and atlas maps today.

So our maps, our conceptual representations of the world we live in, have changed to more closely match our enlarged experience of the world. 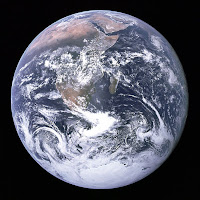 If you are as old as I am or older, and you can remember your first sight of that first photograph of the planet, you can verify this fact. I remember globes and maps with stronger grids and less-natural colors, and I do now own and often look at maps that look more like the "real" earth, as we know it now. I had not noticed the difference! Have you?

To illustrate, this first example is from a 1925 encyclopedia, and the second is from the 2004 CIA World Factbook. I wanted to find a 1960s (or better, early 1970s) example but failed (probably because I was looking on Wikipedia's Wikimedia commons site for images I could legally copy). 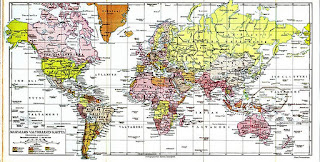 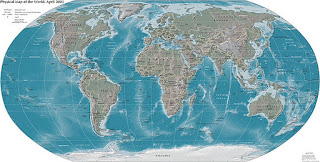 I don't know exactly what to make of this idea -- yet -- but it has something to do with sensemaking and narrative. My mind has been clutching the idea, mumbling to itself and and running around in circles ever since I came across it a few days ago. I thought I'd tell you about it because it might spark some thoughts in your mind before my mind gets around to telling me what it wants to do with it.
3 comments:

Nail fungus infection is not a choice of yours.

I'm sorry! I was cleaning out the spam this morning and came across that gem of a title. I just had to use it.

What I mean by it is: here is a report on book writing progress. The book's content is between eighty and ninety percent done (hard to say exactly). The more I write the more I like it, but it is not yet done. Five of my closest colleague-friends, those who may see what I have written before anyone may see what I have written, have received "early-early" review copies of the incomplete book. All others on the reviewer list (and I thank each and every one of them for their patience) will receive the "early" version for review as soon as anybody may see it.

However I will show you the high-level table of contents, in case you have any feedback on the book's structure, and so you can see that I am still writing it. Color key:
The contents:

Part One: Introduction and Evaluation

What this book is for
Why I wrote this book
This book and you
Notes on the book
Chapter 2: Why Work with Stories?

Chapter 3: What Is a Story?

The ant and the dove
Definitions of story, stories of definition
A working definition
Chapter 4: What Are Stories For?

The essential skills of a PNI practitioner
Breadth and depth in story work
Evaluations of story work
Chapter 15: Advanced Topics in Project Planning

Chapter 21: PNI Stories from Other Lands

Incorporating narrative into e-learning
Probing a wound gently
Holding up a mirror
We said, they said
Too much and too little
Contradicting ourselves
Shooting the messenger
The near miss
Discovering the obvious
10-15 more of these stories left to clean up


You could look at this and say, "What? You have so much left to do! All those shocking purple parts!" But of course the introduction, planning and story collection parts would be the longest. The other parts will be much shorter and faster to write, so I do see a sort of light at the end of the tunnel. I am working on the catalysis section now, writing by PNI phase, sorting into basic and advanced as I go.

The "PNI stories" should end up at between 20 and 25 when I'm finished: this will be a sort of (highly anonymized/fictionalized) "folk tale collection" of stories about things I've learned from projects I've done: not "case studies" or "best practices" but more like a trial and error parade. The format is the same as in the previous case studies, but there are just lots of them now. I have notes on all of these stories but about half remain to be cleaned up. Sort of like a nail fungus infection, which is no choice of mine or yours, just something that remains to be dealt with.

Why I am I telling you this? Because the blog was hungry; to let you know I'm still writing; because I wouldn't mind some feedback on the organization of the material; because winter is coming; because I found such an excellent spam title.
No comments: