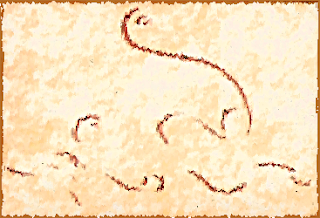 Note: I've left this page up for historical purposes, but NarraCat has now been superceded by NarraFirma, my new open source software for participatory narrative inquiry.

NarraCat is a set of python scripts I have developed for my in-house use to do narrative catalysis for clients. I use it to look for/at patterns in collected stories and in answers to questions about them. It could be used for any sort of mixed-methods research really, but I use it mainly for narrative work.

I have released NarraCat under the Affero General Public License.

{For those who want to get right to it: GitHub repository here.}

NarraCat helps you look at stories and answers to questions about them using quantitative and qualitative methods. It's a power tool for power producers of narrative catalysis.
That sounds exciting, doesn't it? But beware, this cat scratches. NarraCat is really just a heap of python scripts that run on top of some very excellent open-source libraries for data visualization and statistical analysis, namely SciPy, matplotlib and Graphviz. So it is not a professional, polished software package. It's a tool I built myself to use myself. You can use it too, but only if you treat it with patience and care. It's a bit of a scaredy-cat.

These are some images generated by NarraCat.

A conspiracy of results

So in a typical project I use NarraCat to generate something like several thousand of these images. Some hundred of them usually get included in a catalyzing report of some sort. If things go as they should, some dozen of them rush around in the dreams and discussions of somebody somewhere for months, upsetting assumptions and generating ideas. That's the point of the whole thing, to catalyze thought, imagination and discussion.

You are asking: Where do you view all of these thousands of images? NarraCat simply dumps them into a vast conspiracy of folders it creates under your "output" folder. You then use whatever file browser you prefer to look at them. This picture is just some files in the Mac finder. (I don't usually use a black background on it; I just did that so you can't read the file names.) Now you know why the correlation number on that scattergraph was huge; it was so it can "jump out" when looking at lots of such graphs at a small scale.

Now, I have been told that I have a gift for looking at thousands of tiny images and having those that are different in useful ways "jump out" at me. I don't believe I am unique in that. I think it's a matter of practice. But even so, I have built into NarraCat a variety of ways to reduce the number of images I am required to process, just to save time for more valuable uses. I generate sorted lists of the strongest correlations, and I set thresholds below which trends are tucked away, to be explored only on jaunts through the data chasing an enticing trend.

And I try to pack lots of information into few images. For example, the correlation matrix you saw above summarizes about a hundred detailed scatterplots, which NarraCat also generates but which I consider only when particular details merit consideration.

Where are the stories? 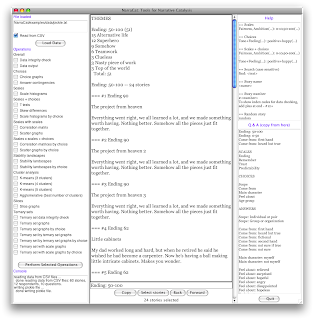 Are you asking where the qualitative part is? I was coming to that. NarraCat has a minimal "browser" interface in which you can look at selected lists of stories based on answers to questions about them, like all the stories told by dog owners that featured excellent cats.

On the left of the browser is a list of things NarraCat can compute, related to folders it can populate with lots of image files. You can use this "command center" to make it spit out images. And then you can get a cup of coffee, or several, while NarraCat does your bidding. Note that this can take hours if your data set is complex and you ask NarraCat to do a lot of your bidding.

In the middle section of the NarraCat browser is a story, optionally with some answers to questions below it. Or it might be several stories one after another that you want to read together. How do you make story selections? With that ugly little box under the list of stories. Yep, it's a nasty command line interface. (Or a beautiful command line interface, depending on whether you remember liking these. I liked them. They were magical. You spoke into the darkness and your bidding was done.) At least NarraCat remembers the last several selections you made so you can recall them and see them again.

What can you select?
Finally, on the right of the NarraCat browser is a list of all the questions you have in your data set, and some how-to help, all of which is meant to help you remember which magic words to type into the stony-faced command line.

Not very pretty, is it?

If you are saying under your breath "this is not a user-friendly program" -- go ahead and say it loud, because I knew it already. You won't offend me. I like to say NarraCat has a face only a programmer could love.

You can take this handy test to determine if NarraCat is for you.
Questions? Suggestions? Ideas? Send me a note at cfkurtz at cfkurtz dot com.

More options: Take a look at Creative Bloq's article on "The 33 best tools for data visualization" to find other things that are somewhat like NarraCat and may work even better for you!