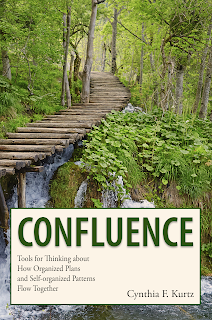 It's done. The new book is ready for you to read. It has an Amazon page with print and Kindle versions, plus a web site (at cfkurtz.com/confluence) with downloadable excerpts and exercise materials. You should also be able to order the book at your local book store (ISBN: 978-0-9913694-1-6).
Confluence is about the ways in which organized plans (like roads) and self-organized patterns (like traffic) intermingle and interact in our lives, families, communities, and organizations. It's about complexity, but it's not just about complexity. It's about how the structures and procedures we design and the spontaneous patterns that emerge as we interact co-occur, intersect, and press on each other.
The book revolves around the use of seven "thinking spaces," blank canvases you can use to explore organization and self-organization in situations and from perspectives that matter to you. Each space explores a different aspect of confluence. A group exercise helps you use the spaces to make sense of things together. 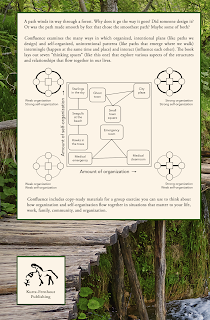 Aside from the first chapter (which introduces the book) and the third chapter (which explains the group exercise), most of the book uses the seven thinking spaces to explore a variety of situations, from ghost towns to factories to folk tales to mirages. I wrote these explorations for two reasons. First, I wrote them to use the spaces in front of you, so you can see how you can use the spaces yourself. And second, I wrote the examples to help you practice using the spaces as you read and think about my explorations.

I would like to say a great big thank you to my wonderful group of 25 "early readers," who sent me feedback on the book and helped me improve it tremendously. Some people sent just a few bits of feedback, and some sent extensive notes. Every bit of it was helpful.

The journey so far

I developed the first of the book's seven thinking spaces in 2001 at IBM. For a time it was part of the Cynefin sensemaking framework. In 2010 I renamed the space the Confluence sensemaking framework and posted it here on my blog. At that time I added three more spaces. But then I got busy with other matters (mainly Working with Stories and NarraFirma) and put the whole thing aside.

Two summers ago, I finally decided that it was time to go back to Confluence and see what it wanted to be next. At first I thought it should be a game, but it quickly morphed into a book. I wrote the first chapter in two weeks, so I thought the book might flow out in a matter of months. It did, but the number of months was close to twenty-four.

Some of the spaces were fine the way I had them, but some were embarrassingly awful, and I threw them out and started over from scratch. Most of the chapters took two or three months to work out and write. A few took four or six or even eight months.

I finished the writing in January of this year. Since then I've been busy getting feedback, improving usability, and getting the book ready for publication. Finally it is published and ready to read.

I have no idea.

I've been thinking about this topic since roughly 1989, and I will probably continue to think about it as long as I can think about anything. I don't know what anyone will do with what I have created. I know that people have used some of these thinking tools in the past and found them useful. I have a sense that more people might find them useful in the future. That sense has carried me through the past two years, even through the months when it seemed like I was wasting my time writing this book. So I'll see what people do with what I have created this time, on this pass over the idea.

I do have a few plans. I'm not big on promotion -- I usually want to move on to the next project on my list -- but I have been asked to talk about the book by something like three or four people who have podcasts, newsletters, interviews, that sort of thing. So I'll do those. If you have a podcast or interview series and want to have me talk about the book on it, drop me an email.

It is possible that I'll end up doing some consulting or coaching related to helping groups use the confluence thinking spaces in their projects. I don't know. What I do know is that this book wanted me to write it. So I did. And I'll see what happens next.

If you have a comment on the book, or advice, suggestions, or anything, feel free to let me know.