I've just posted an updated version of Working with Stories on the web site.

The most interesting thing about the new version is that it has about 300 figures in it. This should put to rest all the "such a long book and no pictures!" comments.

I hope you like the pictures. I thought a lot about what sorts of pictures to put into the expanded book. If you were familiar with the book a long time ago, you'll know that the first pictures were all taken from nature. I did actually take a lot more nature pictures specifically for the expanded book, but when it came time to use them I decided that (a) it would take too long to find places for them all in so much more text, and (b) maybe they weren't the greatest pictures (for that purpose) anyway. (I'll do something with them eventually.)

So I went back to visit a style of illustration I developed in the very first talk I gave about stories in 1999. I used stick people telling each other stories, and it worked pretty well back then. I went to see the old folks, and they were just as keen to help out as they had been before. I think they did a good job helping me make the book more interesting and skim-ready. Here's a sampling of illustrations from the book. 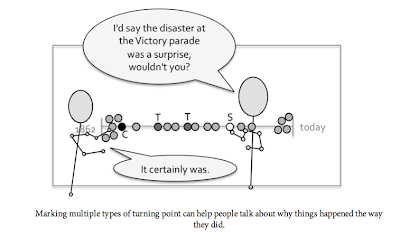 The second exciting thing about the new version of the book is that it's half the book it was. I've split the monster into two parts for good. The parts of the book previously called "Advanced Topics" and "PNI Stories" have been moved into a second book, called More Work with Stories: Advanced Topics in Participatory Narrative Inquiry. I'm calling it the "companion volume" to Working with Stories.

Now, what's left to do?
Then I'm done with the whole darn project, and a new part of my life will beckon, a part not spent thinking about the-book-the-book-the-book every day. As always, thanks to those who have encouraged and suggested; stay tuned for more updates; and keep that helpful feedback coming in.

Oh and by the way, as part of cleaning up figures that were in the book, I replaced the figures for the confluence framework with ones I think are more clear. If you don't think they're more clear, let me know.