(This is the sixth in a series of eight observations about stories and storytelling in groups, and about helping people tell and work with stories. See the first post for more information about the origin of the "eight things.")


What people think you mean when you talk about stories and story projects, and what you can do about it

This observation originally arose from watching what happened when I asked people to tell me stories, both in what they said and their body language (when I could see it). People veer off into one or more of several predictable trajectories at the mention of the word "story." I've been amazed by the consistency in the responses I've seen. People even use the same words even though they have never heard other people use them. I have found this to be true whether I am talking with people face to face, on the phone, in groups, or over the web. Over time I've developed a sort of map of the universe of what people think stories are and do, and I've found it has uses at different levels.

First, here are categories of responses I've seen to the word "story" mapped in relation to three functions stories provide: they engage our attention, they influence our beliefs or actions, and they transfer knowledge and information. 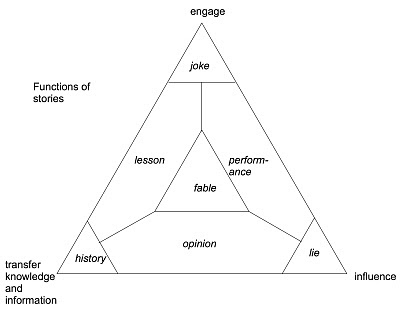 Note that some types of story involve more than one function. A lesson engages and informs; a performance influences and engages; an opinion influences and informs. Fables (folk tales) are the most powerful and adaptable stories because they include all three elements.

This next triangle shows paraphrases of some of the things I've heard people say in story collection workshops and what that indicates they were thinking I meant when I said "story." 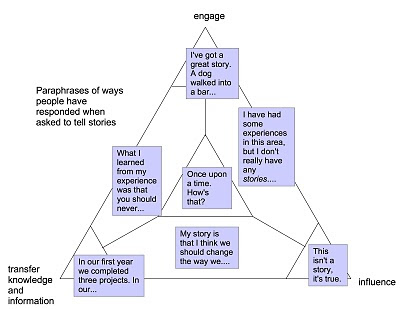 This triangle shows the same divisions but with synonyms of the word "story" I found on thesaurus.com. 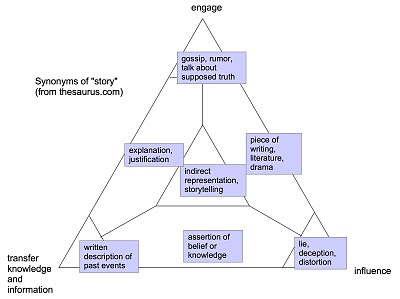 I thought at first while doing this little thesaurus exercise that there was nothing in the "joke" spot. But soon I realized that stories as gossip and rumor fit well there, because they engage people in connecting with emotional resonance on issues that are difficult to talk about. In that sense jokes, gossip and rumors are all methods of oblique emotional engagement through stories.

You can envision two copies of this triangular model occupying two parallel planes: the plane of naturally occurring stories and the plane of purposeful stories. 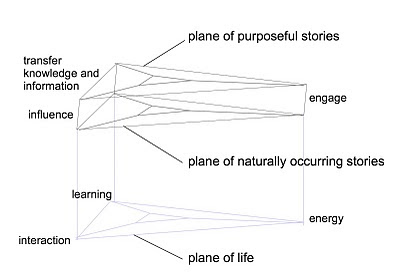 And then you can envision another triangular plane beneath: the plane of life itself (which is of course why we tell stories in the first place). People, and groups of people, need to maintain energy, interact with other people and groups, and learn from experience to better survive and thrive.

Purposeful stories, on the other hand, are like domesticated animals. The purpose of a domesticated chicken is so strong that the chicken is unable to survive in the wild.

The function of a purposeful story, or its place on the triangle, is designed in advance. But the function of a naturally occurring story - if it has one - becomes apparent only after it has been told.

When we shape a naturally occurring story to fit our needs, we are essentially domesticating it to suit a purpose. We do this naturally and without realizing it all the time. We encounter many wild stories every day, but we select some to tame based on needs we may only be vaguely aware of (or may deny). For example, the first time little Joey says "dog," one parent will tell the other simply because it happened. The second time Joey's parent tells the story to a neighbor, they might add some details that emphasize how precocious little Joey is. By the time little Joey is a dog trainer with a syndicated TV show, the story may have grown to an elaborate fantasy about how Joey had a precocious empathy with dogs never seen before or since - a full-blown purposeful fable.

I'm sure someone will be saying here that there are no completely purpose-less stories, that even the shyest of wild stories has some purpose whether we admit it or not. I agree, and that is why I drew a center region on the model instead of a center point, because the center point is theoretical and probably never seen in real human conversation.

Here I've taken the "Things you can do" headings in the What is working with stories page from WWS and placed them on the triangle. 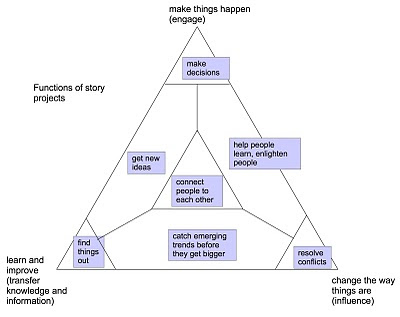 It is interesting, first, that the project categories from the book map so well and completely onto the triangle. It is also interesting that only one category maps into the center region: that of connecting people without any other purpose.

As with stories, story projects exist at two levels. Some story projects are highly purposeful in that they have predefined goals, but others are wild in the sense that the goal is only to collect some stories and see what comes of it. Neither is better, but they are different.

When you ask people to tell you stories, they will almost always move away from what you want them to do in two predictable ways. First, they will float up from the natural plane to the purposeful plane. Second, they will move towards one or two of the triangle vertices.

Why keep people in the middle of the natural plane of storytelling? Because for story listening to lead to useful outcomes, it requires the authenticity of wild stories. As soon as a wild story is given a purpose (usually through what people think you want them to do) it becomes a purposeful story and authenticity dissipates. Authenticity is the essence of story listening. It is what separates the approach from focus groups and surveys, which are soaked in purpose.

For the best story listening, you need to keep people both on the natural plane and in the middle region of the triangle until after the story has been told. Afterwards, when you ask people to answer questions about their stories, they can place the stories precisely in the triangle. Such placement does give both storyteller and listener valuable understandings about the story, but it must be done at the right time. In fact, telling people that they will have a chance to describe and explain their story afterward helps them keep the story in the center, because it allows them to tell it without explanatory purpose. So if you are asking questions about stories, let people know.

How can you keep people in the middle of the natural storytelling plane? With preparation and practice. When you are collecting stories in interviews or group sessions, pay attention to which vertices of the triangle people seem to be attracted to, and adjust your approach. Such attractions will vary both by individual personality and by group culture. Engineers tend to be drawn to the information-transfer vertex, while performers gravitate to engagement and salespeople to influence. The better you get at recognizing deviations from the center of the natural plane, the easier you will find it to help people return there.

What I've found works best is to balance your attention on three elements of experience, each of which keys in to one of the triangle vertices:
Creating such a balance communicates freedom from a single purpose. It also creates a downward motion through its emphasis on what actually happened to the teller.

But having said that, if your project is heavily invested in one of the triangle vertices, it is reasonable to include a question that deliberately guides people toward a purpose. However, understand that you will not be collecting naturally occurring stories when you do this. The stories will be crafted for the purpose of performing to the specifications you have outlined. Sometimes you do want this purpose and should accept it. However, I usually suggest that every vertex-pointing question be offset with a centering question. Why? Because one of the reasons you are collecting stories in the first place is to find out things you cannot possibly guess in advance. The more you corral stories into one location, the greater your danger of missing useful patterns and trends in unexpected locations where you have not have the foresight to look.

At the project level

You can use the diagram is to create a triangular portrait of your project's goals and motivations, with some areas lit up and others dark. One way to fill out the triangle is to tell two purposeful future histories about your project before it starts: the best outcome and the worst outcome. In the best outcome, which of the areas of the triangle are most prominent? Do you find things out? Do you get new ideas? And then in the worst outcome, which areas are missing or go badly? Do you fail to resolve conflicts? Do you find it impossible to make decisions or choose between options? By doing this you can find out which areas matter the most to you, and you might be surprised by what you find.

Once you understand your motivations in doing the project, you can use the diagram to plan how you will carry it out. Recall earlier that I cautioned against story elicitation questions that lead people into one of the triangle vertices. There are ways to design your project towards a goal without leading people into a vertex in their storytelling, by carefully selecting how you collect stories (but not what questions you ask).

These are some ideas on methods:

For story elicitation when you do choose to lead people deliberately into a vertex, try these approaches:


Finally, the triangle model is useful in getting "buy in" from people whose support you need to complete the project. A common problem with getting people to help you (or let you) do story projects is that they misunderstand what you are trying to do, what will happen, and what will be the result of the project. I've seen several projects die because their instigators were unable to communicate to those in charge (of money or permission) what they wanted to do. Or more likely, the instigators were unable to stop those in charge from jumping to erroneous conclusions about what the project was about.

In the same way that people rush to a vertex or side of the triangle when you ask them to tell stories, people rush to conclusions when you describe a story project. Maybe you want to help people transfer knowledge using stories, and people think you want to make dangerous changes to corporate culture. Or you want to find stories that engage people, and they think you want to collect personal information. Or you want to do a naturally centered story project, one that collects stories without preordaining what you will get from them, and they want to push you into collecting only "compelling" stories or "the best" stories.

You can use the triangle model to plan how you will communicate to people - funders, collaborators, management - about the project itself. You don't have to show people the diagram, but using it can help you to craft a story about how your project will proceed, so that you can convince them to help you or let you carry it out. It can also help you think about how people might respond and plan for it. For example, if you want to do a centered project, you might prepare a plan for guiding perceptions at each vertex (oh, that's just project planning; oh, that's just marketing and sales; oh, that's just KM) back to a more balanced perception of what you plan to do and why.