(And then, in the fourth of the series of eight, this is the third in a nested series of four: telling stories, making stories happen, listening to stories, and herding stories.)

(And then, this post is about opportunities in story listening.)

When I wanted to write about the opportunities you can find in listening to stories, I found myself hindered by three obstacles.
So, what to do? How to talk about the wonders of story listening without spilling the beans or making things up?


The Landscape of Story Listening Opportunities

Here's what I decided to do. I pulled out and skimmed over all of the catalysis reports, workshop records, and other project-related writings I've created over the past ten years. Every time I saw an outcome (something found out, confronted, noticed, discovered, enabled, put in motion) I jotted it down. But I translated every outcome to something generic, like "So that's what has been happening!" When I got through all the project materials I could find, I had about 200 such outcomes. I clustered those, clustered the clusters, gave the clusters names, and removed all the redundant items. I tried to get each cluster down to ten items or fewer (but did not always succeed).

In doing this little retrospective exercise, I translated from the specific to the general partly to get past any problems with client confidentiality, but more so to make the outcomes transfer better into any situation you might be facing. In doing this I hoped to communicate the scope of opportunities you can gain by listening to stories. I wanted to show you the lay of the land and give you a fly-over of what I've seen.

These are all translations of real (usually much more detailed) patterns I and others saw both in stories that were told and in answers that were given to questions about stories. Remember that because most of these outcomes came from my contributions to story projects as an outside catalyst, I have no idea which of these things actually worked for clients. And some of the catalyzing elements I throw out to stimulate sensemaking are deliberately off-base. But still, I think you can get something useful for your story listening by poking around in these outcomes.

The resulting list of outcomes has these large clusters:


Climbing through the looking glass 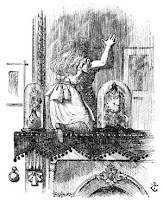 There is this great part in Through the Looking Glass where Alice discovers that things in the world on the other side of the mirror are not the same as what you can see in the mirror:


Then she began looking about, and noticed that what could be seen from the old room was quite common and uninteresting, but that all the rest was a different as possible. For instance, the pictures on the wall next the fire seemed to be all alive, and the very clock on the chimney-piece (you know you can only see the back of it in the Looking-glass) had got the face of a little old man, and grinned at her. 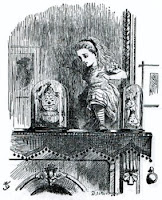 This is an excellent metaphor for seeing yourself through the eyes of other people. When you look into a mirror, you see yourself reflected in a mechanical way: you look, but you do not move. Asking people questions in controlled surveys with closed-ended questions that exclude exploration is like looking into a mirror. But when Alice climbed through the mirror into the other room, she saw things she could not have seen without going there. Asking people to tell you stories is like climbing through a mirror because you are asking them to bring you into their mirror world and show you around. When you immerse yourself in the stories people tell, you are not just looking into their world, you are going there. So the outcomes in this cluster all have to do with what people found out by climbing through the mirror.

How they see us
What they think we are saying

This cluster of outcomes has to do with gaining a better understanding of the characteristics and groupings of people who are telling stories. I'd say one of the most frequent positive outcomes of story projects is that people realize either that there are subgroups among the storytellers that were previously unknown, or that the subgroups that exist are different from was previously understood. These outcomes give people a sort of field guide to the groups involved in an issue so that messages and approaches can be tailored to what works best for each group. 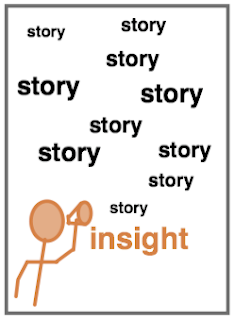 The outcomes in this cluster have to do with getting to know people better: studying them, really.

Life history: what makes people tick
Behavioral study: why people do what they do
Habitat study: wants and needs


Talking to the elephants

Nearly a standard result in story projects is that the elephants in the room break their silence and start loudly telling story after story to anyone who will listen. As a result it becomes impossible to continue to deny the existence of problems everybody knows about. This can have a cathartic effect on a person or group or population, in a workshop, in a private office sitting alone, in a building, across an organization. However, the moment when the elephants start to talk is also one of the most dangerous moments in a story project, because people are most likely to turn away or shred the project in reaction. That is one of the reasons why confronting a mass of collected stories is best done in the context of a sensemaking session.

For example, say people have collected some hundreds of stories and they are going to have a few dozen people work with the stories in a sensemaking workshop. These people might think they should send out the stories for people to read before the session, as "homework," to save time for the more important activities that will take place in the session. I've seen that done, so I usually recommend against doing this and suggest handing out printed stories at the start of the session itself. Why? Because the context is different. If people are reading stories alone, perhaps in the midst of other work, they are not ready to hear the elephants talking and will dismiss or ignore them (and then the elephants will not attend the sensemaking session). But when people arrive at a sensemaking session and understand why they are there, they are ready to make the most of the opportunity of conversing with the elephants and learning from them. There is an element of ritual, of greeting the elephants if you will, that smoothes the transition to self-awareness.

The best story projects surprise people with new ideas. Being ready to be humbled by the wisdom of people who seem to know nothing about something you know a lot about is a prerequisite for getting anything useful out of listening to stories.

The last cluster of outcomes from story listening projects involves the impact not on those who listened to stories but on those who told the stories. The opportunity to be heard and to contribute can be the most important opportunity a story project provides. If lying to people about collecting their stories breaks the storytelling machine, truly listening to people, and making sure they know you are listening and value their contribution, has the opposite effect. It builds trust.

I've seen projects that seized this opportunity and used it to change how people felt about and perceived both listeners and tellers, and I've seen projects that squandered the opportunity, even when it was badly needed. How you talk about the project to people is very important. It takes work and testing, but usually you can find a way to convey to a group of people that their unique experiences are valuable to something you all care about. One one project I remember we found that saying, "We want to know what this is really like" helped people understand what we were after; but it took several iterations to get to what worked. It's different for every group, and it may be different for subgroups as well.

How you collect stories and what you do with them also has an impact on trust. For example, say you put out a report on a new policy direction that includes not only the insights arrived at in a sensemaking session, but also all the original stories from which those insights flowed. When the storytellers see how their unique experiences contributed to the new direction in policy, they see what they did to help and will be willing to help again (and perhaps most importantly, see themselves as someone who helps). But if you listen to them without giving them any indication that you used what they said, they may assume (rightly or wrongly) that you discarded their contribution. It can sometimes be hard to admit that grand policy conclusions were based partly on simple stories. Sometimes the experts in the group find it hard to share attribution with the laity. To be honest I've seen few projects that were willing to keep storytellers in the loop as the results of story listening were brought out. But when I have seen it done I've been amazed by the energy it has produced; and that is energy that future projects can tap into.

How storytellers react to telling stories
With that our fly-over view of the story-listening land of opportunity comes to a safe landing. I hope it has been helpful in planning your own journey.